The 'unity' of evil 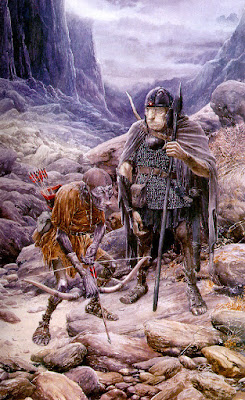 The tracker 'snuffler' orc, and the soldier - just before their lethal quarrel (by Alan Lee)

One of the remarkable - and useful - aspects of the past few weeks, has been to observe the unity of evil.

I mean, the fashion in which the most deeply and strongly evil-aligned (hence systemically dishonest) institutions have come forward - in lockstep - to show their flag of allegiance, to spout the same lies, to double-down on these lies.

It is now trivially easy to perceive the side of evil, its size and extent; and some persons and institutions about whom we may have been unsure have now declared-themselves.

A foreshadowing was seen last summer in the way that the large corporations and financiers stepped-up to signal their uncritical support of the MLB antiracism agenda; with its foundational dishonesty and upfront encouragement of looting, arson, violence and murder.

Given that evil is intrinsically fissile - all those on the side of evil hate and fear each other, and each aspires to manipulate and exploit all others; this demonstrates the actual, and most powerful, force of cohesion at work when evil is strategic - which is that evil entities hate, fear and aspires to destroy Good, even more-powerfully than they hate each other.

This is illustrated by the episode in Lord of the Rings when Frodo and Sam are traversing Mordor and observe a quarrel between a large soldier orc and a small tracker orc, which ends by one killing the other.

Sam naively remarks that he hopes such 'nice friendliness' would spread around in Mordor - then 'half our trouble would be over'.

Frodo more wisely observes that such mutual hostility 'is the spirit of Mordor'. 'Orcs have always behaved like that... when they are on their own. But you can't get much hope out of it. They hate us far more, altogether and all the time. If those two had seen us, they would have dropped all their quarrel until we were dead.'

Such is the proper interpretation of the current unanimity of the side of evil on the subject matter of the US election: because they can clearly 'see' the side of Good, they have dropped their quarrels and are united by their fear of Good and desire to destroy it - which is more powerful than their hatred and fear of each other.

And, while it is no doubt true that if Good is defeated the side of evil would rapidly break-apart and fight each other; this would not benefit the side of Good.

Good can only come from those affiliated with Good, aiming at Good. So long as there are Good people, a Good 'side'; then they can indeed benefit from the quarrels of evil (as did Frodo and Sam); but without the reality of a side of Good, then there can only be an increase of evil.

In this instance, if/ when The System eliminates all perceptible Good from the world; and tears itself apart by the increase of selfish, short-termist Sorathic evil - then the world will be a more evil place as a consequence.

The lesson I draw is that the unified opposition of Good by evil (here and now) makes discernment of these two opposed sides very simple; and then there is this choice to be made between the sides (with no neutral ground): to which shall I, personally, affiliate?

So long as evil is united, the situation is not lost; because Good remains a genuine threat - we may not perceive our strength, but the powers that control evil do perceive a very significant obstacle to their plans: a very significant threat to their chance of victory.

And so long as the side of Good is visible and as evil reveals itself more and more clearly by its ever increased lying, and other evil acts; there is an increasing possibility that those currently on the side of evil will awaken and repent and switch sides (bearing in mind that the door to repentance is always opened to those who choose to knock)...

This is also a great fear on the side of evil. The longer the current situation continues and exacerbates, the more likely it is that the unity of evil will be broken; and the side of Good strengthened.

@Wm - Fixed. I was so busy writing new posts today, I didn't get round to checking the previous ones through the day - which is when I usually manage to pick up the most egregious typos.