The owl in the night, age five - memories of residual Original Participation 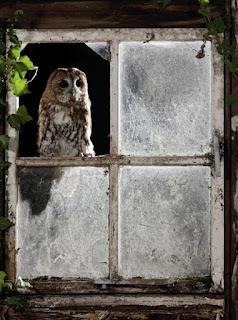 I have again been thinking-over a clear childhood memory, from approximately age five; about awakening in the night and hearing an owl in the woods.

This was related to having recently made the move from Devon to Somerset, and finding the new place bigger, stranger and with more unknowns - one of which were the woods visible across the fields and above the house opposite. These seemed large and mysterious, and contained strange noisy creatures such as peacocks cries, donkeys braying and (at night) Tawny Owls hooting and screeching.

I have a very clear picture of being awake in the depth of night, the house silent, and terrified by the repeated calls of an owl. I could not block out the sound - even hearing it through a pillow wrapped around my head and under the blankets.

In desperation I would utter 'prayers' that were more like spells; multiply-repeated pleading for my safety, as if God was a malevolent tyrant who could (sometimes) be mollified (temporarily) by sufficiently exaggerated and abject grovelling...

But the most significant aspect of this memory is that it captures the residue of Original Participation - that passive, immersive, spiritual way of being that characterizes the youngest children - and the earliest stages of man's cultural development (as nomadic hunter-gatherers).

It is not full Original Participation, because my 'self' was somewhat separate; but the main context was that I felt myself immersed on a spiritual communication with all significant beings in my world.

The owl out there in the woods, and myself in my bed, were directly aware each of the other - our minds open to each-other - and in a way that could not be blocked.

I knew that the owl knew all about me; including that I was scared, where I was; and the owl knew that what I most feared was that the owl would be perched on the window sill, outside the closed curtains, staring at me through the fabric and waiting for me to get out of bed and pull open the curtains.

And I feared that I would not be able to resist doing so!

When I consider my earliest childhood memories I am struck by how relatively few of them concern people, human beings; and how many are - like the owl incident - about other Beings - including places.

I had a personal, mutually mind-reading, relationship with places and 'things': I knew them, they knew me - and I knew that my own fears would be known to Them and would attract exactly what I most feared*.

I took for granted as a basic assumption that the world was alive, had consciousness and intent.

I knew that my Mother and Father loved me and would protect me against... every possible threat; I knew this because I knew 'everything' that was relevant to me, all possible threats.

I also knew that, therefore, I was my own worst enemy. There was evil intent in the world, I was protected; but if I was to invite evil then I was vulnerable, and my greatest fear was that I would bring-down the evil upon myself.

The fear that I might, in a moment of insane weakness or absent-mindedness, go to the window and draw back the curtains and see that owl, sitting and waiting for me.

*Another incident from the same era was when I confronted my fear of the boys outside toilets. The reason for being afraid was obvious - they were located in a dark, smelly and very grimy shed. The urinal was simply a tiled wall with a drain, about seven feet tall, and with a high 'ventilation' gap leading over to the mysterious unknown that was the girl's toilets block. When we went to the toilets as a group of boys, we could laugh in its face; but that only made things worse when I had to go alone into it, as happened one morning during a lesson. But if only I could show the place I was not frightened, then it would not get me. (I took for granted that the toilet was a bully who would pick on the weakest.) So I did this by emulating the big boys, and peeing as high up the wall of the urinal as possible - trying to reach the ventilation gap and spray it over onto the girl's side. Unfortunately, I lost control of things, leaned-back beyond the vertical, and ended-up by showering my-self... This was, of course, deeply humiliating and a source of great amusement for the toilet. From then onward I was a beaten Man, the toilet knew I was a beaten Man; and I became afraid to enter the toilets alone - whatever the consequences (which, of course had the usual, predictable, result...).

There's a marvellous spooky story called 'The Lonesome Place' by August Derleth, that captures that idea of children sensing the spirit of a place. Two little boys, living on the outskirts of a small town, have to pass through the Lonesome Place - a sort of waste area of railway tracks, grain elevator, and lumberyard, beyond the reach of the street lights, where low-hanging tree branches create dark and ominous shadows. In the daytime, they don't worry about going through the area, but at night, they know that a monster lurks there, and they have to run at top speed to escape with their lives. The adults, of course, pooh-pooh their fears, which they can barely articulate anyway, but together they swap stories about their near escapes from the creature.

The story is available online, I believe, and I think you'd enjoy it. I have it in an anthology called "Hauntings: Tales of the Supernatural".

As children, we are attuned to the enchanted world. Sadly our demystification as we grow older does not make us more aware or powerful but lessens us.

Like you, I find it remarkable how events of early childhood remain steadfastly real as we age. The fears of our tender years spur us to courage and our joys to wonder like never again. Somehow we don't turn out to be St. George slaying the dragon or Perceval seeing the Grail. The world is a poorer place for it.

@TH - I don't agree with your pessimism! We lose Original Participation - but can, if we choose, and actively do so, move forward to Final Participation. Indeed, that is our destiny, it is what God wants us to do.

The loss of Original Participation is only a tragedy if we stop and get stuck in the mainstream materialist phase of the Consciousness Soul, when we are cut off from the world and alienated in a world without meaning or purpose.

Many people have similar highly charged memories of owls. Whitley Strieber sees it as a common “screen memory” covering up the trauma of a close encounter. Obviously not an explanation that’s going to fly with you, Bruce, but I thought I should mention it.

@Wm - The main problem with that explanation is that 'screen memory' seems to be a nonsense term that seems to be derived from Freud-invented nonsense about something called repression.

This is seen all the time in Hollywood, but (almost-) never in real life. It terms of mechanisms, it isn't the way the mind works. More to the point, why should it be true? Freud talked almost pure nonsense almost all the time.